Book Review of: God and Sex: What the Bible Really Says, by Michael Coogan 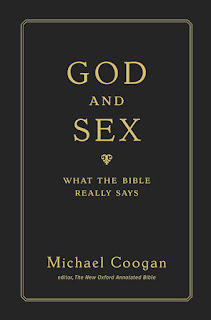 Michael Coogan’s book, God and Sex: What the Bible Really Says, is one of the most revolting and heterodox pieces of prose I’ve read in a long time. Ironically, the book has no right to be called by its given title since, as we will see, Coogan doesn’t believe that God has anything to do with either the God or the sex he finds in the Bible; and what he believes “the Bible Really Says” is not what the Bible says at all. It is a figment of Coogan’s fertile imagination that he intends on using to create a new sexual revolution or, at the least, give traction to the one already upon us. The endorsement chosen from Bart Ehrman, the New York Times bestselling author of Misquoting Jesus, sets the pace. Ehrman says Coogan “shows how ancient authors viewed the world of sexuality, and how these ancient reflections can influence modern thinking on issues ranging from adultery and premarital sex to same-sex relations and heterosexual sex within marriage.” Another remark on the inside cover says, “…the Bible contains many contradictory, ambiguous, and downright strange directives.” Coogan was also interviewed by TIME magazine and he essentially says the same things. Make no mistake about it. Coogan is attempting to turn traditional sexual mores upside down and, interestingly enough, he will attempt to do so by appealing to the Bible itself as the source of these revolutionary ideas. So buckle up. You’re in for an interesting ride.