Robert is an international author, lecturer, debater, producer, and founder of Catholic Apologetics International Publishing, Inc., a non-profit corporation dedicated to teaching and defending the Catholic faith.  He holds advanced degrees in Theology and Religious Studies, from George Washington University; Westminster Theological Seminary; and Calamus International University. He is also the chairman of Stellar Motion Pictures, LLC in West Hollywood, California, which produces movies for scientific and religious audiences. He is the executive producer of the movie, The Principle, which appeared in AMC and Regal Cinemas in October 2014. Robert is also the executive producer, writer and director of the movie, Journey to the Center of the Universe, which was released on DVD in September 2015. Robert is presently working on a third movie, The Church versus Galileo: An Historical Documentary which will be released in late 2016.

He has appeared as a featured guest on various radio programs, including: Catholic Answers Live; Al Kresta Live; The Andy Anderson Show (WMCA, New York); The Dick Staub Show (WYLL, Chicago), Off the Shelf (Ignatius Press); Right Here-Right Now; Putting it on the Line; The Bible Christian Hour; The Mark Dankoff Show; In the Spirit of Chartes, and many other radio programs.

Since 1995 he has written articles for: The Remnant, Latin Mass Magazine, Christian Order, Catholic Family News, Our Sunday Visitor, Catholic Faith and Family, The Coming Home Journal, Envoy Magazine, This Rock and The Kolbe Center, and reviews of his books appear in Homiletic and Pastoral Review, Touchstone Magazine and Salon.com. For 10 years from 2003-2013, Robert was a featured writer for the magazine, Culture Wars. His January 2008 article: “The Old Covenant: Revoked or Not Revoked?” led the US bishops to excise an error concerning the Mosaic covenant from the 2006 United States Catholic Catechism for Adults, which was approved by the Vatican in 2009. In 2002, Robert was a lecturer for the Kolbe Center in Rome and personally met and talked with Pope John Paul II.

In his beginnings, in 1994 he produced and hosted The Catholic Answer Man radio program, which was featured in the Baltimore archdiocese paper The Catholic Review in October 1994. Robert was inducted into the Who’s Who Among Professionals in 1996; and nominated as “Envoy of the Year” in 1998 by Envoy Magazine.


Laurence Gonzaga, MA
Store and Web Admin
B.A. Psychology, 2006
M.A. Child Development Psychology, 2009
CAI is a Catholic lay apostolate dedicated to the teachings of Jesus Christ preserved by the Magisterium of the Catholic Church. It stands on the forefront of Catholic Apologetics, explaining Catholicism to fellow Catholics and defending it against her opponents. With the help and intercession of our patron saint, St. Robert Bellarmine, and in communion with the other great Apologists of our Faith, we have every hope of winning souls for Jesus Christ."
General:
Primary Website: www.robertsungenis.org
Store: http://cai.ecwid.com
Donations: http://cai.ecwid.com
(Catholic Apologetics International INC -a 501(c)3 organization through which donations can be made to support the work of Robert Sungenis)

Do you know any first grade students, Christian or non-Christian, who believe that 2 + 2 = 5? Do you know any high school students who believe that common water is not H2O? Do you know of any Christian students who, knowing that 2 + 2 = 4 and that water is H2O, ever tried to wish it away by calling on God in prayer? Do you know of any comparable students who believe, or religious people who teach, that two truths can be contradictory, or that a true fact and a false fact can be true as a unit? I thought so. Welcome to the world of Mark Shea where exaggeration is as common as H2O and making straw men is as common as straw; where calling your opponent a fool or liar is more important than trying to understand what your opponent is saying and why he says it. It’s the same MO as always from Mark Shea: Shoot first, ask questions later. Read the Full Article (PDF)
Read more

It's not often that I step into the social crises confronting the secular world, but the COVID-19 crisis has become a dire exception. I have never seen such blatant manipulation of scientific data as I have seen with COVID. While feigning help to Americans by insisting we wear masks and social distance (which even some of their own experts admit doesn't really have the ability to mitigate COVID to any substantial degree, which then promoted Dr. Fouci, just yesterday, to say we should all wear goggles instead of masks), they impugn the use of a simple drug, hydroxychloroquine, that has proven to be an effective remedy to COVID, at least in the early stages when someone discovers he has been infected, and certainly as a preventive measure to stop the COVID virus from doing any harm at all. Instead, they accuse long-time medical professionals who recommend hydroxychloroquine as being quacks and charlatans, even though taking this well-established drug, that has had a grea
Read more

I believe all that the Church teaches about the Desire for Baptism or the desire for Confession, which is found in Council of Trent, Session 6: Regarding Baptism it says in Chapter 4: “By which words, a description of the Justification of the impious is indicated,-as being a translation, from that state wherein man is born a child of the first Adam, to the state of grace, and of the adoption of the sons of God, through the second Adam, Jesus Christ, our Saviour. And this translation, since the promulgation of the Gospel, cannot be effected, without the laver of regeneration, OR THE DESIRE THEREOF, as it is written; unless a man be born again of water and the Holy Ghost, he cannot enter into the Kingdom of God.” Regarding Confession in Chapter 16 and Canon 4 it says: “As regards those who, by sin, have fallen from the received grace of Justification, they may be again justified, when, God exciting them, through the sacrament of Penance they shall have attained to the rec
Read more

04/07/20 Robert Sungenis Live - Our Lady of Fatima; Mark of the Beast; Is Judas in hell; James White on purgatory; Jesus had brothers and sisters; Baptism required? 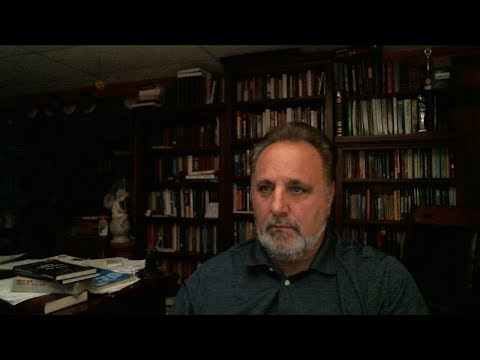