Book Review of : The Israel Test by George Gilder 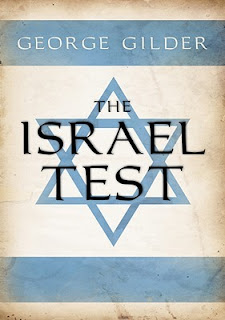 “Israel has fewer flaws than perhaps any other nation—Israel is the pivot, the axis, the litmus, the trial.” George Gilder on the Jews

“As far as my experience goes they are also no better than other human groups, although they are protected from the worst cancers by a lack of power. Otherwise I cannot see anything ‘chosen’ about them.” Albert Einstein on the Jews

“All critics of Jews should not be tagged as anti-Semites…that the Nazis are brutes does not make us angels....Criticism is not the same as hatred, and critics are not our enemies. The greatest friends of a people are not those who praise but those who honestly find fault. A people without criticism is either a dictatorship or a community so deeply embedded in smug self-satisfaction as to be on the road to decadence.” William Zuckerman, Jewish author.

Perhaps the best place to start in reviewing The Israel Test is with the author himself. Although one might think after seeing the title, the dedication, and scanning the table of contents that Gilder is the consummate Jew, he is a purebred WASP but with a self-professed penchant for fairness, an identity that he employs quite judiciously in his book to quell any suspicion that he is biased towards Jews. He is a Harvard graduate, a Reaganite republican and die-hard supply-side capitalist, but not afraid to criticize his own party as was the case in his famous attack on Barry Goldwater’s anti-intellectualism or what he calls Reagan’s “worst, most self-indulgent and foolish moment…his speech advocating the destruction of nuclear weapons” (p. 243), for it is Gilder’s belief that “in a region full of proven enemies, an Israel without nuclear weapons would not be viable” (p. 88). Coming from a respectable line of English authors, Gilder was a speech writer for Nelson Rockefeller and Richard Nixon and one can tell quite easily in The Israel Test that he has a flair for prose and a pungent vocabulary to get his point across. His other works, such as Sexual Suicide and Men and Marriage, made a formidable shot across the bow of feminism; while his Wealth and Poverty climbed to the New York Times bestseller list and became a pocket encyclopedia for capitalism. At one point he purchased the conservative magazine The American Spectator, which he then transformed from a political pulpit to a technology periodical, but it floundered and he was forced to sell it back to the previous owner who reversed its course. Gilder also supports Intelligent Design against the theory of evolution, which led him to found the Discovery Institute. He has many other accomplishments to his credit, including being the editor-in-chief of the Gilder Technology Report and is a much sought after speaker. In short, Gilder is an accomplished man of the world and his intelligence and his literary talents appear quite formidable.