A Review of David Klinghoffer’s: Why the Jews Rejected Jesus

A Review of David Klinghoffer’s:
Why the Jews Rejected Jesus
(Doubleday, 2005)
by Robert Sungenis, Ph.D. 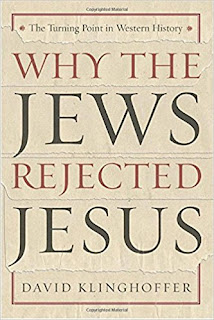 “No authentic Messiah would inspire a religion that ended up
calling upon the Jews to reject the manifest meaning of Sinai. It is
really that simple.”
David Klinghoffer, Why the Jews Rejected Jesus, p. 215.

As we can see from the above citation, Klinghoffer has thrown down the gauntlet against Christ and Christianity. To set the stage for his treatise, Klinghoffer tells us that his book is the fruit of a twenty‐year interest. In college he was challenged by a very astute Christian who concluded that Klinghoffer really didn’t understand his own reasons for not converting to Christianity. After college, Klinghoffer considered marrying a very spiritually minded Catholic girl with whom he had many theological discussions, but he was still quite ignorant of his own Jewish religion. This changed when he met his future wife, a Jewish girl who, after being baptized in the Catholic Church, later “felt the magnetic pull of Judaism and left the church.” This prompted Klinghoffer to begin defending Judaism, not because he necessarily “seeks to dissuade any of the world’s two billion Christians from their faith” but “to tell a story of passionate disagreement” (pp. 9‐10). This soft‐spoken disclaimer, however, belies a book that makes the adjective “passionate” a rather gross understatement. Simply put, Klinghoffer is on a modern mission to debunk Christianity, and in essence he is saying, ‘I rejected Jesus, and you can, too. Let me show you the reasons why you should.’