A review of : Jesus of Nazareth: The Infancy Narratives Author: Joseph Ratzinger/Pope Benedict 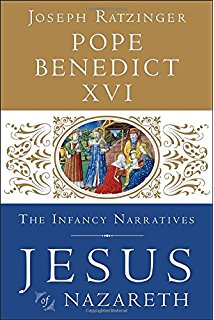 Headlines were made round the world a few months ago in the secular newspapers reporting that Pope Benedict apparently squashed a 2000-year old Catholic tradition as he rejected the belief that Jesus was born on December 25, 1 BC or 1 AD. The newspapers further remarked that the pope believes Jesus was not born in a manger and there were no animals at his birth. They had their fun with it. Now let’s get serious.

In reading the reports one gets the impression that the pope wrote a lengthy treatise on Jesus’ birth date and concluded from his vast research that Catholic tradition was not to be trusted. The secular press would be quite happy with such a conclusion since it would bring yet another blow to the traditional faith and mores of the Catholic Church and add to the cultural distance the modern world wishes to have with the medieval past.

Expecting the worst, I quickly ordered the book and read all of its 132 pages. The title is: “The Infancy Narratives: Jesus of Nazareth” with the author stated as “Joseph Ratzinger, Pope Benedict XVI,” which is the same dual authorship he used for the first two volumes. We must note here that he is the first pope to engage in such a dualistic approach to the papal identity. My feeling is that Joseph Ratzinger likes being a biblical scholar much more than he likes being pope, and that he accepted his selection as pope only because he knew that the crop of liberal and heterodox cardinals in line to replace John Paul II would have been an even worse nightmare for the Church. Although I was admittedly confused by the pope’s use of two names, I think at this point it may be healthier than I thought previously. It helps the Catholic populace at large to distinguish between the pope’s official teaching and the speculative thoughts to which he is entitled as a private theologian. Anyone who has been in theology and biblical interpretation long enough knows that they are, to use an expression, not exact sciences. The pope’s book helps us to distinguish the pope as a man and the pope as the vicar of Christ on earth. It also helps us to reject the virtual pope worship that many EWTN Catholics erringly cultivated during the reign of John Paul II when they refused to separate the vicar from the man.