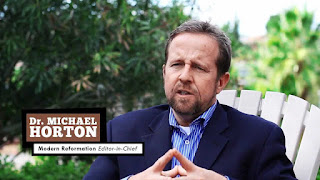 Comments by Robert Sungenis:
In this interview, Dr. Horton inquiries, once again, into the Catholic understanding of Justification – how a person is justified before God from his sins so that he can go to heaven. Twelve years ago, Dr. Horton, along with his colleagues Robert Godfrey and Ken Rosenblatt, had a debate against Robert Sungenis, Patrick Madrid (now editor of Envoy magazine) and William Marshner (professor at Christendom College). Since that time, there has been no movement from either side in modifying their position on Justification.

In the September/October issue of Modern Reformation, Horton devotes the whole magazine to promoting the Protestant Reformed beliefs of Justification, and does so mainly by castigating any understanding of Justification that does not adhere to the “faith alone” formula that he and his colleagues believe. His radio program, The White Horse Inn, devoted itself exclusively to the subject of Justification the whole month of September and into October.

Dr. Horton presently teaches at Westminster Theological Seminary in Escondido, California. Westminster Seminary is the leading breeding ground for all things believed from the Calvinistic persuasion. It is the seminary from which I graduated in 1984 and which subsequently put me in the unique position of knowing their beliefs from the inside out.