Book Review of : Augustine and the Jews: A Christian Defense of Jews and Judaism

Book Review of Augustine and the Jews: A Christian Defense of Jews and Judaism
Author: Paula Fredricksen,
published by Doubleday, 2008, 488 pages.
ISBN: 978-0-385-50270-2
Reviewed by Robert Sungenis 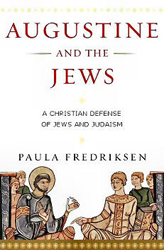 Paula Fredriksen is a Jewish professor at the Religion department of Boston University. She resides both in Boston and Jerusalem. She has written a number of books about Christ and Christianity, including Jesus of Nazareth, King of the Jews: A Jewish Life and the Emergence of Christianity, which won her the 1999 National Jewish Book Award, and From Jesus to Christ: The Origins of the New Testament Images of Christ, which was used as a working document for a popular Frontline documentary. In addition to Augustine and the Jews, she has also written Augustine on Romans. In 2004, she was highly critical of Mel Gibson’s, The Passion of the Christ, claiming, inter alia, that the movie was “inaccurate” in many places. It is my understanding that Ms. Fredriksen does not claim to be a Christian; rather, she is a Jewish historian of Christianity, much like Amy Jill Levine is a Jewish professor of New Testament at Vanderbilt University but is a practicing Jew. By all counts, Ms. Fredriksen is from the liberal school of academic theology and she treats the subject of Jesus and Christianity from that perspective. This school of thought, by and large, does not believe Scripture is divinely inspired (in the traditional definition), and thus the history and even the theology is only a product of its human authors. One of Ms. Fredriksen’s more controversial claims is that the Jews had little or nothing to do with the execution of Jesus, the responsibility for that event being laid solely at the feet of the Romans.