A Critique of Maurice Finocchiaro's Book, Retrying Galileo, and the So-Called 'Galileo Myth' 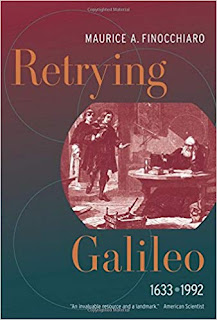 Galileo scholar, Maurice Finocchiaro, has put forth a supposition that the Catholic Church’s decrees against Galileo were not based on the Church declaring that heliocentrism was a heresy. He suggests the “heresy” interpretation is a “myth” begun in 1633 and carried on until today. Instead, he suggests the Church decreed heliocentrism was merely “contrary to Scripture” but not heretical. For example, in one place he argues:

Carafa’s conflation of “heretical” and “contrary to Scripture” was the first sign of how easy it would be to come to think that Copernicanism had been declared heretical, which was to become one of the most persistent myths in the subsequent controversy.

To my knowledge, Finocchiaro is the only Galileo scholar to advance this novel thesis. At the outset, we must note that the idea of it being a “myth” implies there was no truth to the accusation of heresy; that it was completely fabricated; that it had no historical roots; as well as no precedent and no justification. As such, the bar is set quite high for Finocchiaro to prove his case. The shortest and most obvious answer to Finocchiaro’s challenge is that since Galileo was convicted by the 1633 Inquisition of being “vehemently suspect of heresy,” and since Finocchiaro agrees the Church condemned Galileo with that specific canonical label, logic requires that Galileo could only be suspect of holding the heresy if, indeed, the heresy had already been defined and declared by the Church. The previous defining of the heresy, which would have occurred in 1616, would allow the Church to decide at the 1633 trial whether Galileo’s belief made him guilty of the heresy, or perhaps some lesser charge, such as “suspect” of the heresy.